Skip to content
Micro-Shading Touch-Up: Why It Is Not an Option

Microshading, also called Powder/Ombre brows is a semi-permanent makeup procedure that deposits pigment into your eyebrows with a single point needle to enhance the appearance of your eyebrows by making them look fuller and thicker. It is a trending and popular cosmetic treatment. Nevertheless, one thing that people do not talk about particularly is the importance of the touch-up.

Powder brows touch-up is an essential part of the process. A lot of people are confused, probably wondering: How many touch-ups are there? What are the touch-ups like? And, most importantly, when and why should we need to have touchups?

When and Why you need a Micro-Shading Touch-Up

During the healing process which usually takes between 4 to 6 weeks, eyebrows go through different stages, and in the end we expect to lose about 30-40% of the pigment. The tricky part is predicting how your skin will keep hold of the pigment. So we always work safe during your first visit, because we can easily add more later rather than take away. During this second session we can also add thickness, slightly adjust the shape if you like or just add an extra pass for longevity, so touchup is not an option, rather it is a necessary and inescapable step. Without it, the initial treatment would simply be useless, and you would’ve wasted your hard-earned money. The safe estimate of a touchup session would be under an hour more. There will be another healing period after the touch-up session, same as after initial. Once all that is done, you will now get to see the satisfying outcome of your newly done eyebrows.

When Is the First Touch-Up Done?

You need to remember that you shouldn’t ask for a touch-up before the healing period ends because the pigment color has not been settled yet, so you need to give your brows time to heal properly. The first touch-up should be done when the eyebrows are completely healed, so no sooner than 6 weeks after the initial treatment.

What Happens If You Don’t Touch Up?

If you don’t follow up with the touchup, your micro-shaded eyebrows may fade quicker and you may not get the look that you wanted to achieve. 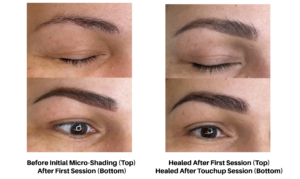 PrevPreviousBenefits of Permanent Makeup
NextCan Altra Beauty Lab “Touch Up” Another Artist’s Work?Next
We use cookies on our website to give you the most relevant experience by remembering your preferences and repeat visits. By clicking “Accept”, you consent to the use of ALL the cookies.
Do not sell my personal information.
Cookie SettingsAccept
Manage consent

This website uses cookies to improve your experience while you navigate through the website. Out of these, the cookies that are categorized as necessary are stored on your browser as they are essential for the working of basic functionalities of the website. We also use third-party cookies that help us analyze and understand how you use this website. These cookies will be stored in your browser only with your consent. You also have the option to opt-out of these cookies. But opting out of some of these cookies may affect your browsing experience.
Necessary Always Enabled
Necessary cookies are absolutely essential for the website to function properly. These cookies ensure basic functionalities and security features of the website, anonymously.
Functional
Functional cookies help to perform certain functionalities like sharing the content of the website on social media platforms, collect feedbacks, and other third-party features.
Performance
Performance cookies are used to understand and analyze the key performance indexes of the website which helps in delivering a better user experience for the visitors.
Analytics
Analytical cookies are used to understand how visitors interact with the website. These cookies help provide information on metrics the number of visitors, bounce rate, traffic source, etc.
Advertisement
Advertisement cookies are used to provide visitors with relevant ads and marketing campaigns. These cookies track visitors across websites and collect information to provide customized ads.
Others
Other uncategorized cookies are those that are being analyzed and have not been classified into a category as yet.
SAVE & ACCEPT